Dr. Birbal Singh Dana was formally a General surgeon by profession. He had a commendable stint at the University Hospital of Libya for over 15 years where he rose to the position of the Head of Department of Surgery, before he took to entrepreneurship in 1991. Having sound business acumen, he put his principles of honesty, diligence and patience to practice in his venture.

A person with vision and vigor, he has been the principal force behind the phenomenal growth of the Group and under his leadership the company has come to be the most respected and widely diversified business house in the Middle East.

Dr. Birbal Singh Dana shifted to Dubai way back in 1991 and established DANA Groups of Companies with the area of operation spread over vast range of products and services both within and outside U.A.E. DANA group has prospered and progressed to the present stage with future commitments and dreams. Today DANA group are a family of over 200 professional, committed, hard working members. In the Financial Year 2004-05 DANA Group had an annual turnover of 500 Million. The group has it’s Corporate Office in Dubai,Manufacturing Facilites in India and UAE and Associate Offices in West-Africa and South-Africa, and Manufacturing Units in Dubai and India backed by highly experienced R & D personnel. 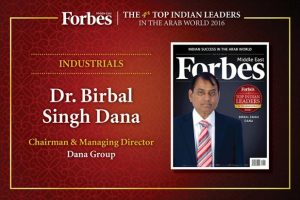 The founder, chairman, and Managing Director of DANA Group, Dr Birbal Singh Dana, is a General Surgeon by profession. Following almost 20 years of successful surgical practice, he decided to venture into the field of entrepreneurship in 1991, and founded the DANA Group under the sound principles of honesty, hard work and patience. Over the years, the company has experienced a period of considerable growth, which has been largely facilitated by a number of strategic acquisitions, resulting in the birth of DANA Group’s various subsidiaries over the years. Dr B. S. Dana has been recognized as one of the Top Indian Leaders in the Arab World by the FORBES Magazine. Forbes List is very well known source for industry rankings around the world and Dr Dana is honored to be on the Forbes Top Indian Leader in the Arab world 2016! Here’s the link to the rankings

Here are a few other lists about Dana Group:

Dr B. S. Dana, has been recognized as one of Top 50 Richest Indians in the GCC 2016 , this is 3rd time in a row, he was on the list for last 3 years and has climbed up the ranks each year!

As a UAE-based multinational conglomerate, DANA Group is made up of seven subsidiary divisions – the cornerstone of which is Seven Eagles International Trading. As the maiden company of the business, which started off dealing exclusively with the trading of medical equipment, it has diversified over the years to become one of the biggest importers and stockists of flat steel materials. “Our Dana Water Heater & Cooler division in Al-Quoz Dubai undertakes the manufactureof water heaters and coolers, water chillers, ammonia chillers, and cold rooms,” Dr Dana says. Dana Group also consists of Dana Steel Processing Industry in Ajman for the production of profiles, sandwich panels, cable trays,lintels,rollformed profiles, fencing/hoarding, tubes, road crash barriers, steel barrels etc,” he details. Dana Group entered Lubricants and Base Oil business in 2012 and has since acquired 3 running Lubricants factories, Dana is currently supplying Oil to over 84 countries worldwide, also including major government tenders from Bangladesh and South East Asia. As part of a detailed expansion project, the company also made its first foray into the retail sector via its subsidiary Dana Mart Hypermarket, which currently has 3 branches. Spread across a 100,000-square-foot area in Ajman, the site was carefully chosen to exploit the high footfall of customers in the area, coupled with the lack of organized retail chains. DANA Group’s Indian Projects: Dana Hospital, Dana Hotel and Dana Industrial Park are projects very close to Dr Dana’s heart. As DANA Group continues to grow, both in terms of its products and customer portfolio, so too do the opportunities for investment, and Dr Dana is eager to emphasise that the company is also looking for ways in which to optimise its operations. “In a move to increase the efficiency of our operation, we are looking to establish our own CRM complex, which will have a cold rolling mill, a galvanising line, and a pre-painting line, enabling the company to continue manufacturing all of its current products using a single raw material. This not only promotes maximum efficiency, but also provides us with a great deal of buying power,” he adds. As a collective company, Dana Group is incredibly quick at identifying changes in demand, adapting to market trends, and implementing the necessary changes to garner a position at the forefront of the steel industry. “A famous Darwinian saying adorns our office walls – ‘It’s not the strongest of the species that will survive, nor the most intelligent, but the one most responsive to change’ – which forms the philosophy behind our entire operation. We strive to remain at the forefront of the market, whether it be as the first company to install a new piece of high tech machinery, or the first to enter a certain market, we are constantly striving to improve and maintain our position as industry leader – a strategy that we are hoping to uphold in the future,” concludes Dr Dana.